You can discover the difference between a scroll saw and a band saw and what the two saws can be used for here.

While melting in the summer heat some of us are already dreaming about Christmas. During this time of the year we DIYers are confronted with sawing work for Christmas decorations.

Depending on the requirements, it's worth taking a look at electric helpers in the form of a scroll saw or a band saw. But what is the difference, what are they used for and which saw is better? Join us on a short trip into the realm of sawing.

In the workshop, many of us have already had some experience with the analogue model - the jig saw. With the fret saw quite fine sawing work can be carried out, mainly in soft wood or plywood. Figures and other shapes can be sawn very precisely.

The electrical variant is known as a scroll saw. Essentially, it is a work table with a saw band attached to a thin saw blade that is moved up and down by a motor. The workpiece is guided along the saw blade on the table. The saw blade can easily be replaced on models with a quick-change system. This is particularly advantageous for interior cutouts. Drill a sufficiently large hole in the workpiece, guide the saw blade through the hole, clamp it in and then saw out the inner piece.

When making a purchase, there are different features that make the work much easier. A hold-down device prevents the workpiece from jumping, a stepless speed ensures a maximum working speed depending on the material. A scroll saw can not only saw plywood but, depending on its performance and saw blade, can also saw plastic sheets and even metal. In addition to the previously mentioned quick-change system for the saw blade, a blowing device for the saw dust also make things much easier. A 45-degree adjustable table extends the possible applications. If you always use the scroll saw in the same place, it is recommended to screw it to the workbench. This increases the stability and makes working even more pleasant.

A closed saw band is led over two rollers. The workpiece is also guided along a work table along the saw blade, however, the (continuous) saw band runs from top to bottom through the material. This gives you better control over the workpiece. The band saw is also suitable for rough work, depending on the size. Normal sawing is not a problem with a narrow band saw blade. And the same applies for simple or guided cross and longitudinal cuts of solid wood. Larger band saws are also ideal for splitting- i.e. halving in the longitudinal direction, boards and beams. For this you use a wider band saw blade with a rough toothing. The rollers and the drive are hidden behind a cover. Only the saw blade and the roller guide are accessible above the worktable. This makes the band saw relatively safe because most of the moving parts are hidden.

Band saws are fairly quiet in operation. Weight matters because it makes the saw run smoother. The passage height and the passage width determine the maximum size of the workpiece to be processed. As a band saw is used more for coarser work, dust extraction is important. The roller guide ensures a smooth running of the band saw blade and should be adjusted as precisely as possible. Many band saws have a tilt-adjustable work table that allows for 45-degree cuts. The larger this work table, the larger the support surface for the workpiece, which significantly increases sawing comfort.

It can be said that a scroll saw is mainly suitable for fine, filigree sawing work. It does not take up much space and ensures very clean sawing results. As scroll saws are cheaper than band saws, before buying one you should think carefully about whether the additional cost of a band saw will be worthwhile.

The band saw is an allrounder, as it is also suitable for rough work. DIYers who want to do more than just crafting will find a very versatile helper in the band saw that will really make things easier in the workshop. 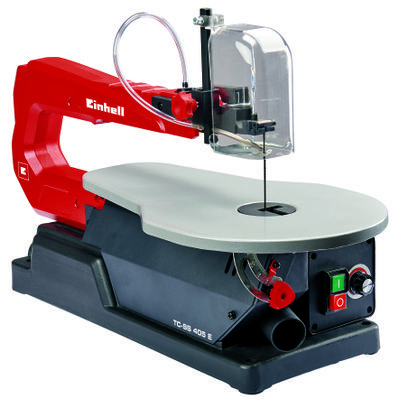